The visuals, text, and movies on this page may not be suitable to all viewers.

Every year, billions of chickens have to go through a difficult, unfair, and painful process before they are turned into food. Chickens aren't just peacefully killed for their meat. The chicken you buy at KFC wasn't as clean as you see it on your plate before it got there. They go through an extremely long and painful ordeal-not only from their environment they live in, but most of the workers handle the chickens improperly. This leads into broken bones, ammonia burns, dehydration, death, and hundreds of deaths per day on one chicken factory. I hope that many people will be influenced by this and other chicken abuse websites and will change their aspect on chickens and eating them. Chickens can be exciting, wonderful, and smart pets. They can be funny, stylish, and your best friend.

Thanks for visiting my website! -Chickens Rule! aka, The Chicken Man

Chickens Being Abused on a Plantation

Here's a video about workers doing insanely horrible things to chickens in Moorefield, West Virginia. The workers were caught on tape stomping and slamming chickens against the walls and floors, twisting and ripping their heads and beaks off, spray-painting their faces, spitting tobacco in their mouths, squeezing them so hard that they released feces, kicking them like footballs, and breaking their bones. Thousands of chickens were tortured like this all while they were still alive. Watch this terrifyingly depressing video and help prevent incidents like this from occuring in the future.

Thanks to PETA and www.kentuckyfriedcruelty.com for revealing this horrific footage and influencing the way many people treat chickens today.

Inside a Chicken Industry

The baby chickens start their lives from incubators and are then tightly crammed into boxes. They never once get to see their own mothers.

Once inside the factory farms, the baby chickens start their abusive journey into becoming food by being dumped into the over-packed chicken factories.

Because the baby chickens are drugged to grow at an abnormally rapid pace, they get too large for their legs. Many of the chicks' legs break and they are usually unable to reach food and water.

A large amount of crippled chickens end up being trampled by other chickens because of space issue. They also die from untreated diseases that are common deaths on chicken factories.

Because the chicks are living in their own waste and their waste gives off ammonia fumes, the chickens throats and bodies get burned by the harmful chemicals.

Unable to leave the feeder, this chick died of dehydration.

After three weeks of being crammed into this ammonia-filled-air shed, this chick has received severe burns and broken legs. She can't even stand so there's no way that she can make it too food or water. The chick will probably die from dehydration or a worker will snap her neck because she has become meaningless to the industry.

These chicken factory sheds hold tens of thousands of birds and because they have become bigger, the competition for water and free space has begun.

This bird was trapped in the wire of a chicken feeder. Thankfully, a COK investigator freed the chicken.

After four weeks of being isolated in this harsh environment, the floors of the factory sheds are littered with hundreds of corpses such as this one.

Luckily, for this bird, a COK investigator managed to give it water and free it, but it still couldn't stand...

COK investigators managed to give aid to many mistreated birds in these barns but, for some, it was already too late...

Now that the birds are nearing slaughter weight, they have taken up practically all room in the shed and the fight for water has become intense. The birds can barely move without disturbing other chickens around them.

This bird has been dead for so long that it's body is decomposing into the waste that was once the floor.

The ammonia burns and scars will haunt them for the rest of their life-that's about another week.

The meat industries of chickens ignores animal welfare. It's difficult to believe this dead bird was less than two months old when it died.

Chickens are gathered three or four at a time, carried upside down by their feet, and are violently thrown through the small openings of the crates that they will be shipped in. Their legs and wings often break in the process. Courtesy USDA.

Once at the slaughter plant, the chickens are dumped onto conveyor belts towards the final and worst ordeal they will have to face.

Those birds who miss the blades or are only partly sliced by them are then dunked into a pan of scolding hot water that is supposed to remove feathers. The ordeal finally ends with the chickens happy to escape the painful seven-week life. The birds are then beheaded, dismembered and ready to eat. So the next time you plan on stuffing your face with a nice juicy chicken leg or a bucket of KFC, remember what they had to go through just to give you that scrap of meat you will probably only eat half of and throw the rest away anyway... After visiting such a depressing page, you should go straight to the Fun and Games section of this site. Thank you for taking your time to see the truth behind KFC and other major chicken industries.

The chickens that don't get their throats slit end up looking like this when they come out of the scalding hot water:

Thank you very much to http://www.chickenindustry.com/ for sharing the inside investigations of this chicken plantation and a special thanks to www.kentuckfriedcruelty.com for getting me involved with helping abused chickens and educating the public about KFC chicken abuse. Go to Kentucky Fried Cruelty.com to sign a petition against KFC chicken abuse and other ways you can help!

Here is yet another video showing chicken abuse... You can learn about and help prevent chicken abuse at www.kentuckyfriedcruelty.com.

You can make posters like the one below, take action to help save tortured chickens, watch movies similar to the one above, sign a petition against chicken abuse, and more at Kentucky Fried Cruelty.com.

There are approximately 300 egg laying hens in the United States to produce the eggs you see at your local grocery store. These chickens are confined to battery cages (small wire cages stacked and lines up in warehouses). Hens are commonly packed four to a cage-that's not even enough space to stretch out or perform behavioral and social needs. The hens continuously rub and are pushed against the uncomfortable wire frame of the cages, causing severe feather loss, bruising, and soreness. 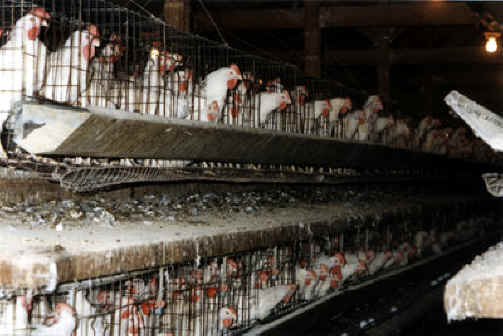 When chickens are confined to a small space for too long a period of time, they tend to get stressed and bored and begin to peck at other chickens. Just imagine if you were trapped in a wire cage with five or six other people no bigger than a closet. You would probably get very stressed and extremely bored and would begin to fight with the other people with you. In order to prevent this fighting, the hen's beaks are "trimmed" when they are young. This is an extremely painful process. Getting your beak halfway cut off is not like trimming your fingernails. It feels like instead, getting the tips of your fingers cut off. This pain can last to a couple of days to a few weeks. It is extremely uncomfortable and makes it painful to peck and eat. This is one way chickens end up starving or dehydrating. 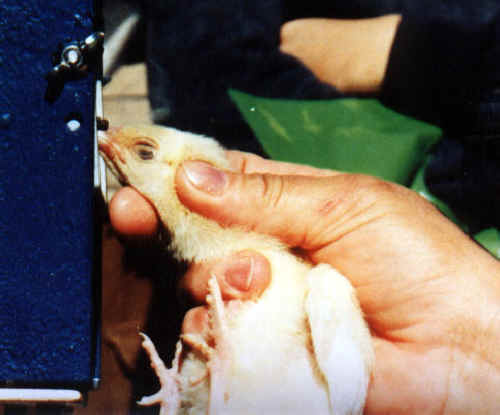 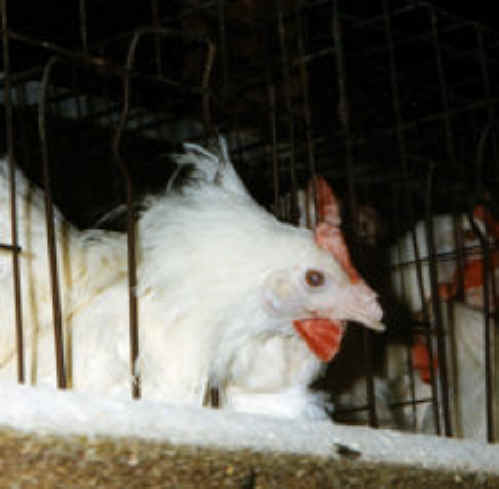 Laying 250+ eggs a year, these chickens suffer from diseases as well as other physical and mental ailments. Some of these diseases include: "fatty liver syndrome" (when their liver cells work overtime to produce protein for egg yolks cause extra fat to form around liver cells), "cage layer fatigue" (when they get too weak to produce another egg-this usually results in death), and Osteoporosis (when they lose more calcium producing egg shells than they can accumulate by eating-their bones usually get brittle from the loss of calcium resulting in broken bones, paralysis, and death).

After one year of producing eggs, the hens are then considered "spent" and are sent off to the slaughter. Their brittle, calcium-depleted bones usually can't handle the rough transportation methods and usually shatter. Their meat usually ends up in low-grade chicken meat products and are shredded to hide the bruises from consumers.

Because chicken meat industries have a growing supply of broiler chickens to keep it busy, egg producers needed to find new ways to dispose of their spent hens. One solution was to turn spent hens into animal feed. The birds would just be picked up and ground up in a portable grinder right on the spot...

"In one notorious case of extraordinary cruelty at Ward Egg Ranch in February 2003 in San Diego County, California, more than 15,000 spent laying hens were tossed alive into a wood-chipping machine to dispose of them. Despite tremendous outcry from a horrified public, the district attorney declined to prosecute the owners of the egg farm, calling the use of a wood-chipper to kill hens a 'common industry practice.'

For every egg-laying hen confined in a battery cage, there is a male chick who was killed at the hatchery. Because egg-laying chicken breeds have been genetically selected exclusively for maximum egg production, they don't grow fast or large enough to be raised profitably for meat. Therefore, male chicks of egg-laying breeds are of no economic value, and they are literally discarded on the day they hatch  usually by the cheapest, most convenient means available. Thrown into trash cans by the thousands, male chicks suffocate or are crushed under the weight of others.

Another common method of disposing of unwanted male chicks is grinding them up alive. This can result in unspeakable horrors, as described by one research scientist who observed that 'even after twenty seconds, there were only partly damaged animals with whole skulls'. In other words, fully conscious chicks were partially ground up and left to slowly and agonizingly die. Eyewitness accounts at commercial hatcheries indicate similar horrors of chicks being slowly dismembered by machinery blades en route to trash bins or manure spreaders."

Thanks to http://www.factoryfarming.com/eggs.htm for revealing what happens before, during, and after to hens on an egg factory farm.

Back to the top.